Over the course of this project, I’ve cited non-webcomic examples nearly as often as webcomic examples. This has occurred for a reason: all aspects of making art on the Internet are interwoven. Patreon originated with a band, even as its greatest earners are now primarily Youtubers and podcasters. The rise of the ad blocker and the mixed results of merchandising have impacted everyone who has ever attempted to profit from their online creations. Everyone who has ever created art online has had to ask how to disseminate it and how to promote it. And the mixed emotions that come with viral status, as well as the negotiation of manufacturing authenticity on the Internet impacts everybody. 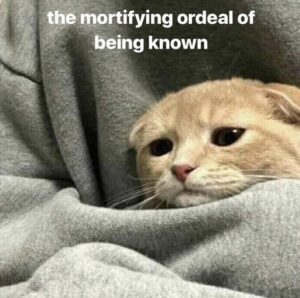 One of these people is Timothy Kreider, whose essay in The New York Times, “I Know What You Think Of Me,” featured a line that became a Tumblr meme in 2018: “if we want the rewards of being loved, we must submit to the mortifying ordeal of being known.” In reaction to the widespread out-of-context dissemination of the quote, he first commented that “it always does some slight violence to a writer’s intentions to yank a sentence out of its context and present it as if it were a complete, isolated thought, like a maxim or commandment.”

The same question of violence towards artistic intent applies to self-promotion on social media: does a webcomic artist embrace the out-of-context virality of their work, or do they advocate its contextual meaning? Do they market a part of themselves as authentic in hopes of becoming an admired personality, or do they attempt to separate their personal identity from the public eye? Do they avoid looking at positive and negative reactions to their work, or do they separate themselves from their work in order to know these reactions?

Ultimately, though, Kreider draws a more universalized portrait of the vulnerability of creating visible work on the Internet: “Seeing your own words transcribed in someone else’s handwriting, or a cartoon you drew with new text inserted in the word balloon, is just a more concrete version of what happens to us all, existing helplessly in other people’s heads, being misunderstood or misrepresented, distorted in their memories, captives of their perception.”

In other words, there’s an argument to be made for social media being another manifestation of the questions all artists face, including webcomic artists.

Forms of media rise and fall in an ever-changing web environment; the podcast was unheard of ten years ago, and the webcomic business today is not as penetrable, as ubiquitous, or as profitable as it was at the start of the 2000s. The structure of the Internet defines the business models and dissemination of webcomics, and a work’s relationships with its creator. “In 2008, three friends and I wrote a book called How to Make Webcomics. It was dated as soon as it came out,” said Kris Straub in “Webcomics: An Oral History.”

Nonetheless, notable trends can be seen in webcomic production and the larger structure of content creation over the past decade. Merchandising and advertising, while they still exist, are supplements rather than income sources. Social media is an indispensable tool of self-promotion for most and dissemination for many. The way that this content is consumed, discovered, and promoted changes content itself.  In this way, as much as examining changes in Internet culture informs changes in webcomics, changes in the world of webcomics inform the way that an individual can understand changes in Internet culture.