THE IMPACT OF SOCIAL MEDIA 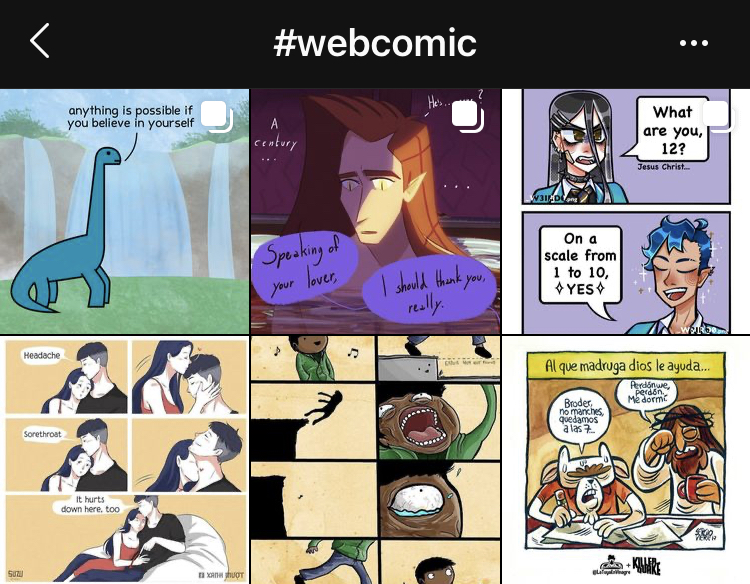 One piece that social media makes up within the webcomic creation puzzle is discussed in the Patreon section: it is a way to brand yourself rather than just the work you create. If a creator’s goal is to gain notoriety and admiration outside of the realms of their most current project, the conflation of one’s self with the product they make is in many cases considered a profitable move.

Perceived openness and authenticity as an online ‘personality’ is one part of this equation, and it’s been commented on many times, including by traditional comics artist Jake Wyatt: “I think the real danger in putting your thoughts and your work online is that you create an incomplete picture of self,” he told SKTCHD in 2015. The negotiation of the personal on the Internet extends across platforms: in her 2019 video essay “Youtube: Manufacturing Authenticity (For Fun and Profit!),” media critic Lindsay Ellis discusses “the emotional labor of only showing the side of yourself that your audience wants to buy.”

“It’s important for creators that their audience think they know you, and that your job depends on you maintaining that sense of accessibility and authenticity without going crazy,” says Ellis in the video (at 29:00). While the visual nature of YouTube and Instagram culture shows us the epitome of “manufacturing authenticity,” the success of Amanda Palmer’s Patreon model demonstrates that this marketing device does not stop at platforms where artists’ physical visibility is central to the content they create. In the comics world, “for creators in specific, it’s a multi-faceted tool they use personally and professionally, with a lot of overlap between those two” (Harper).

For webcomic creators, this question is even more notable than within traditional comics because social media is often not only a means of self-promotion but a means of dissemination. The display of webcomics on one’s own websites has always been a question of incurring server costs, but now it’s also less profitable because visiting individual websites has become less and less of a factor in its users’ daily routines.

Many creators run webcomics with formats that fit into an Instagram or Tumblr format, rather than hosting them on a website of their own. It makes consistent engagement more likely: seeing someone’s comic becomes a question of scrolling through a familiar feed, rather than making a deliberate choice to visit a website.

Outside the realms of deliberate self-promotion and dissemination by webcomic artists, social media also drives the cycle of viral memes, which develops independently from author’s intentions.

If someone’s spent enough time on the Internet within the last five years, it’s probable that they know at least one of these images: 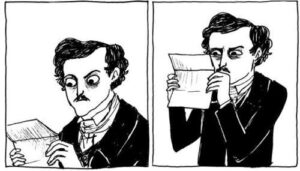 This separation of art from its creator is standard for the model of Internet virality: it operates on out-of-context tidbits of larger projects. K.C. Green (creator of the This is Fine Dog, above) commented to The Verge, “Brevity. Just quick memes. That’s all people want. And that’s all that some of them have seen”  One way or another, it’s an aspect of social media that must be accepted if anyone wants to make content on the Internet.

Some, like Green, are able to turn the virality of their works towards their benefit, selling specific merchandise of those panels. And in the ever-evolving medium of the webcomic, virality doesn’t end with memes. Just as Homestuck once rocketed to popularity through word-of-mouth discussion of its ten-minute animation “[S] Cascade”, its fanwork and arguable spiritual successor Vast Error was able to achieve a viral video through “[S] Ellsee: Dance out your frustrations.” The animation, featuring an animated dance performed by the comic’s two main characters, stands at nearly 800,000 views as of November 2020. Its endearing content, comprehensible to an outside audience, as well as the quality of its music and animation, attracted enough curious attention from people new to the comic that it’s fair to say its virality attracted a significant new audience. A few much-upvoted YouTube comments on the video express such a reaction:

Even though successful boosts such as this one continue to happen to many creators, the reliability of viral content’s capacity for audience-building is largely inconsistent. In a section of Observer’s 2015 study on webcomics, Scary Go Round creator John Allison commented on social media’s increasing unreliability for generating clicks. “At first, social media drove bursts in traffic. Discovery! Growth! Over time, though, the social sites became more jealous of their users. All our sources agreed, people have clicked out of Twitter, Facebook and Tumblr less and less,” he said (qtd. in Dale).

Between marketing and virality, it’s finally important to examine how social media influences the relationship between a creator and their existing platform and fanbase. In both traditional comics and webcomics, the ability to receive instant feedback and participate in direct engagement with one’s fanbase has been framed as somewhat of a double-edged sword.

Comics artist Declan Shalvey, much as he attributes his success to Twitter, has said that the experience leans towards negative for him at the given moment. “Social media isn’t really the best place to have a reasoned debate; it’s where people go to shout at their laptops, and (if) everyone is shouting, no one is listening,” he said in the same article. He and other comics creators interviewed by SKTCHD referenced “fan entitlement,” a fanbase’s idea that the content of the works they love should be dictated by their expectations from it. Through direct access to creators on social media, this mentality can manifest in targeted backlash towards any given participant in the offending media.

While this phenomenon extends as high-up as multi-million dollar franchises like Star Wars, creators are impacted by backlash more intensely the smaller their platform and the more inextricable it is from their medium. As a medium that has always been entrenched in the dynamics of online . Every webcomic creator with a significant social media presence has had to individually negotiate the boundaries of how to engage with the visibility of criticism. Will they ignore it altogether? Step away from fan engagement? Learn to disengage themselves from criticism?

Public engagement with these choices requires further decisions. Will admitting vulnerability become equated with emotional manipulation by one’s detractors? Will choosing not to address a controversy immediately become equated with silence? In the world of social media, especially in the insular case of the fan community, it’s easy for audiences to frame the creator of something they care about as an untouchable celebrity. In other words, influence within an insular community is mistaken for genuine social capital. But the most common targets of successful targeted harassment are, in fact, those creators who are socially marginalized in some way.

As much as individuals’ negotiations with praise, feedback, and backlash vary, so do their conclusions on the worth and value of social media. Is it a net positive? A neutral tool? A necessary evil, or an unnecessary one? Even in webcomics, which are now more tied to social media than ever before, the rules, conventions, and risks of this kind of public space must be individually negotiated.