A strip from Ryan North’s Dinosaur Comics, an early webcomic.

Understanding the changes that the last decade has presented for webcomics and Internet culture requires an understanding of the Internet that originated them, and the conventions that formed around early webcomics.

The earliest webcomics aimed to avoid the syndication requirements set down by newspapers, which were generally stricter than self-publishing online, due to desired standards of familiarity and marketability. In a limited marketplace, success was also comparatively simple. “There wasn’t anything on the internet. Even if your comics were complete shit — which mine were — there was an expectation that people would look at them. What else were you going to look at?”, said Jon Rosenberg of Goats and Scenes from a Multiverse as part of a 2017 oral history.

Standalone strips were generally published on their own dedicated websites; longform storylines depended more on forums and Livejournal. A ‘generation’ of webcomic creators was formed around the communities that ties between their websites created; even now, visiting sites like Dinosaur Comics and Hark! A Vagrant returns dedicated links to other webcomics the sites’ creators liked and admired. 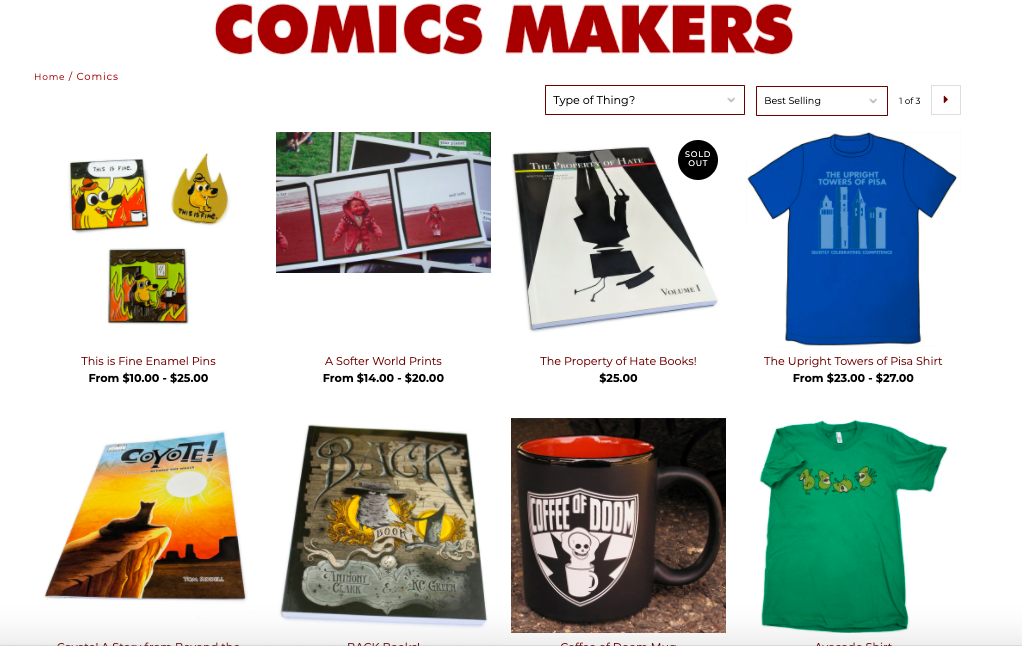 In part, then, the early days of webcomics depended on an interwoven networks of creators who supported each other, which also formed communities focused around making money off of comics, such as the merchandising site Topatoco and the longrunning advertisement service Project Wonderful, which closed down in 2018. These two projects, both originated by prominent webcomic creators, in themselves represent the two primary ways in which webcomics made money in the 2000s: selling t-shirts, and running on-site ads.

This money was not only a product of the general potential monetizing creativity has, but due to the actual necessity that running a popular webcomic presented: the price of high engagement was the literal cost of server management. “If somebody important linked to your comic, you were looking at $400 in server fees,” said Dylan Meconis in “Webcomics: An Oral History.”

For years, the solution was T-shirts. “It turned out, people loved buying funny T-shirts, so that underwrote all of our comics for most of the early 2000s,” said Jeph Jacques of Questionable Content. What was known as the ‘T-shirt economy’ declined towards the end of the 2000s; from the start, this relied on a model in which the merchandising distributor received a significantly higher portion of revenue from the item than the webcomic itself.

CHANGES IN THE WEBCOMICS WORLD

One of the most important shifts in the webcomics world that took place in the early 2010s was the transition away from indirect funding through ad revenue and merchandise. T-shirt sales benefitted the vendor more than the creator behind the image on them.

And in contrast to the originating years of webcomics, in which “a hit webcomic in the early 2000s during the online ads boom could become a very healthy living” (McElfatrick, qtd. in “The Webcomics Business is Moving on from Webcomics”), ad revenue is dying down as ad blockers become more ubiquitous.

The solution, as will be discussed in detail in the upcoming sections, was to receive revenue directly from audiences through crowdfunding services like Patreon and Kickstarter. “The comics themselves are unprofitable but funding through Patreon has allowed me to keep them online and updating daily,” said Drew Fairweather of Toothpaste for Dinner to The Observer in 2015.

In addition, the dissemination and platforms of webcomics have changed dramatically over the years. In the process of unpacking the developing history of webcomics, it is important to understand the differences between the Internet of then and the Internet of now. More and more, people are more likely to use a few wide-spanning social networks and follow links from there than check a variety of individual websites; the insular community of the forum has been largely displaced by the wider-spanning settings of social media platforms; and content is discovered through algorithm-based calculations rather than personal recommendations.

Or, in summary: “The internet has fundamentally changed. People experience media through Facebook and Twitter now, instead of going to websites. It can be really hard to build a fan base when people only see viral stuff,” said Ryan North in “An Oral History of Webcomics.” So how have these changes unfolded? I explore this in two major areas: funding and social media.

Dale, Brady. “The Webcomics Business Is Moving on From Webcomics.” Observer, 16 Nov. 2015, https://observer.com/2015/11/webcomics-changing-business-model/.