Kickstarter was founded in 2009, and works well for larger, more expensive campaigns with specific goals. In the case of webcomic artists, this comes in the form of asking for support for individual projects: this can be seen on the Kickstarter most-funded page, searched by webcomics. Kickstarter has most often successfully – and unsuccessfully – been used with by webcomic artists with the cause of moving beyond the webcomics medium altogether. Many of the top campaigns in the category are campaigns for printed editions of popular webcomics such as Ava’s Demon and Check, Please! Towards the top of the “Video Games” category is an even more radical departure from medium: the unnamed “Homestuck Adventure Game” that became Hiveswap. 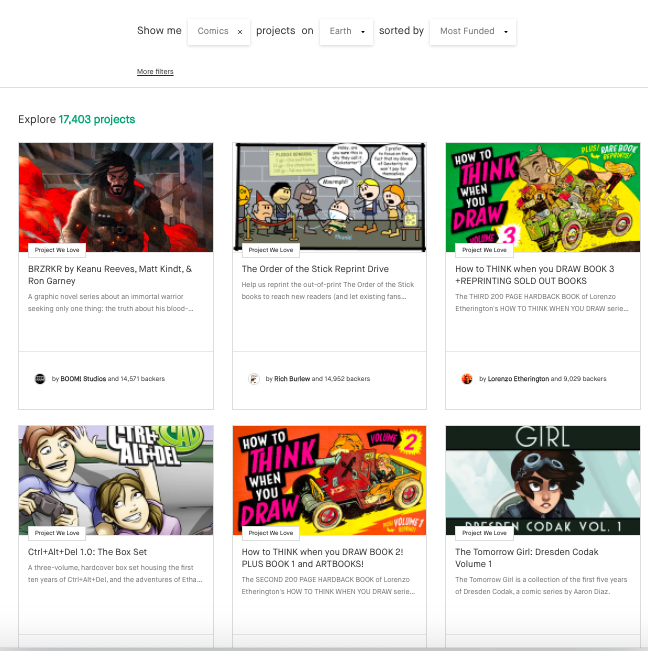 These Kickstarter success stories demonstrate both the obvious benefit of Kickstarter – webcomics (and other projects) with large and enthusiastic established fanbases are often capable of drawing up astronomical financial support for new projects. The Ava’s Demon kickstarter linked above achieved a pledge of $351,076, compared to a $75,000 goal. Check, Please! earned $398,520 of 32,000; the Homestuck game, at the height of the comic’s popularity, was able to a generate nearly $2.5 million, compared to a $700,000 goal.

Each Kickstarter campaign page lists tiered benefits for individuals, as well as larger-scale stretch goals as ranked by increments above the original goal: collectible character cards, special editions, behind-the-scenes content, special PDFs. There’s no doubt that fulfilling a high tier is capable of making fans feel special, as if they’re participating in a kind of patronage. But the astronomical numbers and examples presented here are proof that no amount of personalized thank-yous and promised gifts can motivate this kind of response.

The most successful Kickstarter campaigns are most often not only founded on a successful act of branding or a compelling idea. The popular webcomics listed above each dominated a cultural moment within certain spaces of modern Internet fan communities. Other webcomics that build top-tier kickstarter campaigns, like Penny Arcade or The Order of the Stick have existed for long enough to build up longterm fanbases.

When Kickstarter Fails: Beyond Funding

An inherent limitation of project-based crowdfunding is listed above: particularly in the world of webcomics, a person or project with an established and fervent audience is always starting at a higher ground than a total newcomer to the game.

There is no way around this factor: the privileging hierarchy of funding within artistic spaces is not a product of Kickstarter or of any funding-based space. In webcomics in particular, Kickstarter-scale projects like a publication or a spin-off are in themselves ideas that would not make sense without a large audience. Still, it’s worth noting that Kickstarter’s premise replicates the established publishing industry’s bias towards the existence of an audience. The difference is that, in the case of a publisher, the expectation that an audience will pay for a product decides a project’s fate. In the case of crowdfunding, the audience itself makes this choice in advance, thus guaranteeing – or decreasing the possibility of – a project’s existence.

A fallacy in the realm of discussing Kickstarter campaigns, however, is that the journey is focused entirely on the process of acquiring funding. The obvious barriers that such an absence of money creates can overshadow the further boundaries of organization, integrity, internal cohesion, and artistic vision. The impressive numbers of the Homestuck Kickstarter mentioned above are remembered largely for the dramatic “development hell” that unfolded in the aftermath of a successful campaign, involving a game development company’s alleged misuse of the Kickstarter funds, an ensuing number of missed release dates, and a release that, while modestly successful, landed the game far out of the scope of its source material’s peak cultural relevance.

The dramatic world of games development presents an extreme case, but even printing projects can fail, whether this is due to poor timing, poor planning, or an inaccurate sense of interest in a project. In 2012, the webcomic Pictures for Sad Children, beloved by its fans for the perceived emotional truths it expressed, launched a Kickstarter campaign that raised $51,615 in fourteen days, in comparison to an $8,000 starting goal.

John Campbell, the creator of the comic, succeeded in printing and eventually mailing 750 to 800 copies of the printed book to backers. Several sent-out books, however, went through a two-year delay. The stress of having over a hundred unread email pertaining to the unsent books and lacking the funds to mail them led Campbell to burn 127 copies of his book in a back alley, as well as posting a video of the process online. In discussing the experience, he said “[his] online persona committed suicide” (Hauser).

The greatest lesson of failed Kickstarter campaigns is that dropping a large sum of money into someone’s lap all at once far from guarantees a successful project – in fact, sometimes it does the opposite. The stress of managing ambitious projects, and especially of deciding how to determine what to do with more money, scrutiny, and responsibility that a small-scale artist could have imagined handling at once.

Even if used well, Kickstarter has its limitations. It’s great for securing a large sum of money for a specific, marketable goal; less so for supporting an artist through an ongoing project. This gap in a creative market searching for ways of monetizing art through the Internet gave rise to the second pillar of contemporary webcomics funding: Patreon.